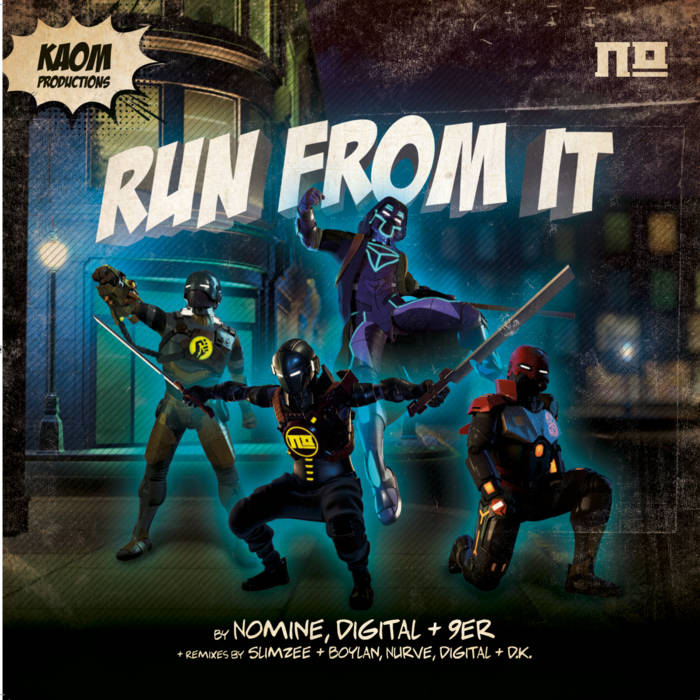 Seminal bass music label Nomine Sound in collaboration with Kaom Productions is dropping an EP from label head honcho Nomine and legendary drum & bass producer Digital, alongside the talented lyrical prowess of 9er, co-founder of grime collective Macabre Unit. They pull together an extensive range of talent, one which dips into a variety of subgenres and produces a ground-breaking body of work, especially considering the names featured across its package. Including reworks from Boylan, Slimzee, Nurve and Digital himself alongside D K, it highlights the range of producers available to Nomine and their commitment to sound diversity within their field.

Up first comes the EP’s base ‘Run From It’, with 9er storytelling through his strong vocal presence, moulded against breaks and sonics with a lumbering impact. Next is followed by Boylan and Slimzee on the remix, who focus heavily on flitting drums and thumbing sub bass. Nurve then steps up for a dubstep inspired stomper, and finally, Digital and D K approach with a more garage infused offering, which helps to shape the instrumentals with its rolling shuffles.

Digital and D K deliver the final track which closes an impressive body of work, one highlighting Nomine Sound’s place within the wider underground scene. They stand as an important part of its foundations and the artists involved with the imprint are a testament to that fact.

Bandcamp Daily  your guide to the world of Bandcamp